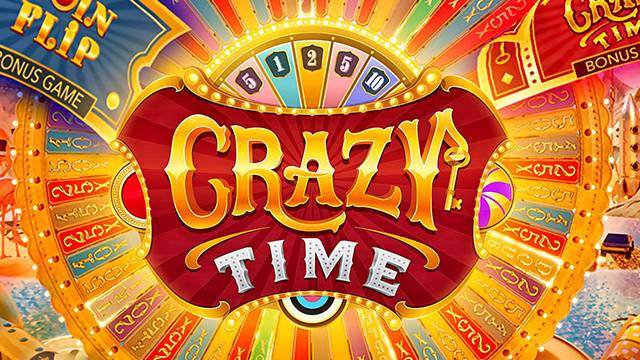 Do you want to have a crazy, but fun time? Then Crazy Time is the game for you. This Live Game Show is packed with action every second, and every round has a chance of a gigantic multiplier. The multiplier can be as big as 25 000 times the stake, is that not crazy? The game is built like a Game Show, with a live host that is constantly commentating the round as it progresses. These Game Show types of games are incredibly exciting, and getting started is very easy. A couple of rounds, and you’ll get the hang of it!

Crazy Time contains multiple Bonus rounds that you can trigger from the wheel, as well as an incredible multiplier which we talked about earlier. This game has really taken the Game Shows to the next level, and the players seem to love it. On this page, we’ll be going through how Crazy Time works, how to play it, and where you can play it!

What is Crazy Time?

Crazy Time is a fast-paced Game Show released from Evolution. You could compare it to any Show on the TV with a live host commentating the progress of the game. If you’ve seen the American game show “The Price is Right” you’ll know what we mean. This form of gambling is fairly new, and Evolution was the ones who initially started it all with their Dreamcatcher title.

Crazy Time is played by the host spinning a wheel containing multiple different numbers, as well as special boxes with bonuses, and your goal is to guess where it’s going to land. The bonus symbols will also send you to special games that can contain awesome winnings if you’re lucky!

The theme of the game is crazy and very colorful with lots of bright colors. The host of the game moves between sections depending on what’s going on. To play, you simply bet on some of the numbers that you’ll find on the wheel. However, we recommend that you sit and watch for a couple of rounds and watch the game to get a grasp of it. In the next section, we’ll be going through some of the basic rules of Crazy Time to help you get started. Try out Crazy Time in one of the TopTop Casinos we’ve listed! How to play Crazy Time

To get started, you simply have to place your bets on the available numbers you see at the bottom. You want to bet on the number you think the wheel is going to stay on, and you can also place bets on the bonus rounds available. The numbers you can find on the wheel are 1, 2, 5 and 10.

Every number is on the wheel multiple times, but the higher the number the more rare it is. There’s also a small slot machine called Top Slot, this one decides if there will be a multiplier. Both the Top Slot and the wheel is spinned for every round.

A round starts with the players placing their bets. After 10 seconds, the bets close and the round begins. The host will commentate every round as it progresses, and spin the wheel. Alongside with the wheel, you’ll find the Top Slot spinning deciding the Multiplier. A round usually goes very quick, as it’s over if it lands on a number. You can also hit the Bonus rounds for extra crazy features which we’ll cover in the next section.

On the wheel we find four different bonus features alongside with the numbers. If you bet on any of these features and it hits, you’re in the game round and can win some awesome winnings. This is what the different bonuses looks like:

Cash Hunt – This is a bonus game containing 108 hidden multipliers. These multipliers are hidden behind random symbols and are given out. Once they’ve been scrambled around, you get to aim and shoot where you think the highest multiplier is hidden. You’ll be given the multiplier you hit. Multiple players play this game at the same time, and they get the multipliers hidden behind the symbols they shoot.

Coin Flip – In this game, the multiplier will be chosen for the win. And as you’ve probably guessed from the name, it’s a Coin Flip. The coin that flips has a red and a blue side, and before the flip two multipliers are generated for both of them.

Pachinko – In this game, you’ll be taken to an arcade-type game with pins sticking out from the wall. A puck is released at the top, which will find itself downwards through the pins. At the bottom there’s multipliers and a symbol that says Double. If it gets on double, all multipliers are doubled and the puck is dropped again. This happens until the puck eventually hits a multiplier, or when the multiplier hits x10 000.

Crazy Time – There’s a red door in the studio, but not just anyone gets to go in there. You only get to join if you get the Crazy time Bonus Game. Inside, a gigantic lucky wheel is hidden. On this wheel, we find three stop signs on the wheel, and you get to pick which one you want. There’s green, blue and yellow. The wheel has tons of multipliers, doubles and triples which can land you gigantic wins. Crazy Time Bonus Game can win you upwards of 20 000 times your stake if you’re lucky!